Calculating Nitrogen Footprints at Universities and other Institutions

Universities and other institutions have far-reaching impacts through activities like education and research; however their operations can also negatively impact the environment. The growing interest in sustainability has prompted many educational institutions to assess their environmental impact through a carbon footprint. However, carbon footprints consider only part of a university’s environmental impact, generally related to fossil fuel energy consumption and the generation of greenhouse gases. A nitrogen footprint not only considers energy but also extends to a variety of other processes like food production and consumption, fertilizer usage, and—especially for a land grant institution—agricultural activities related to its educational and research missions. Universities and institutions are particularly well-situated to reduce nitrogen pollution because they can both educate a community and make management decisions to reduce their contribution to nitrogen pollution.

Within the Nitrogen Footprint Tool (NFT) Network, 6 institutions just updated their original nitrogen footprint results in SIMAP (see below). The results range from 7 metric tons (MT) N at the Marine Biological Laboratory in Woods Hole to 206 MT N at Colorado State University (Dukes et al. 2021). Institution population, location, physical size, and activities contribute to the magnitude of nitrogen footprint results. The nitrogen footprint of food production makes up about half of total institution footprints due to the large amount of reactive nitrogen lost to the environment from fertilizer, harvest, animal production, and processing waste. Utilities, usually consisting of purchased electricity and on-site heat and steam generation, contribute a large portion of institution nitrogen footprints because of the nitrous oxide (N2O) and nitrogen oxides (NOx) released by the combustion of fossil fuel. 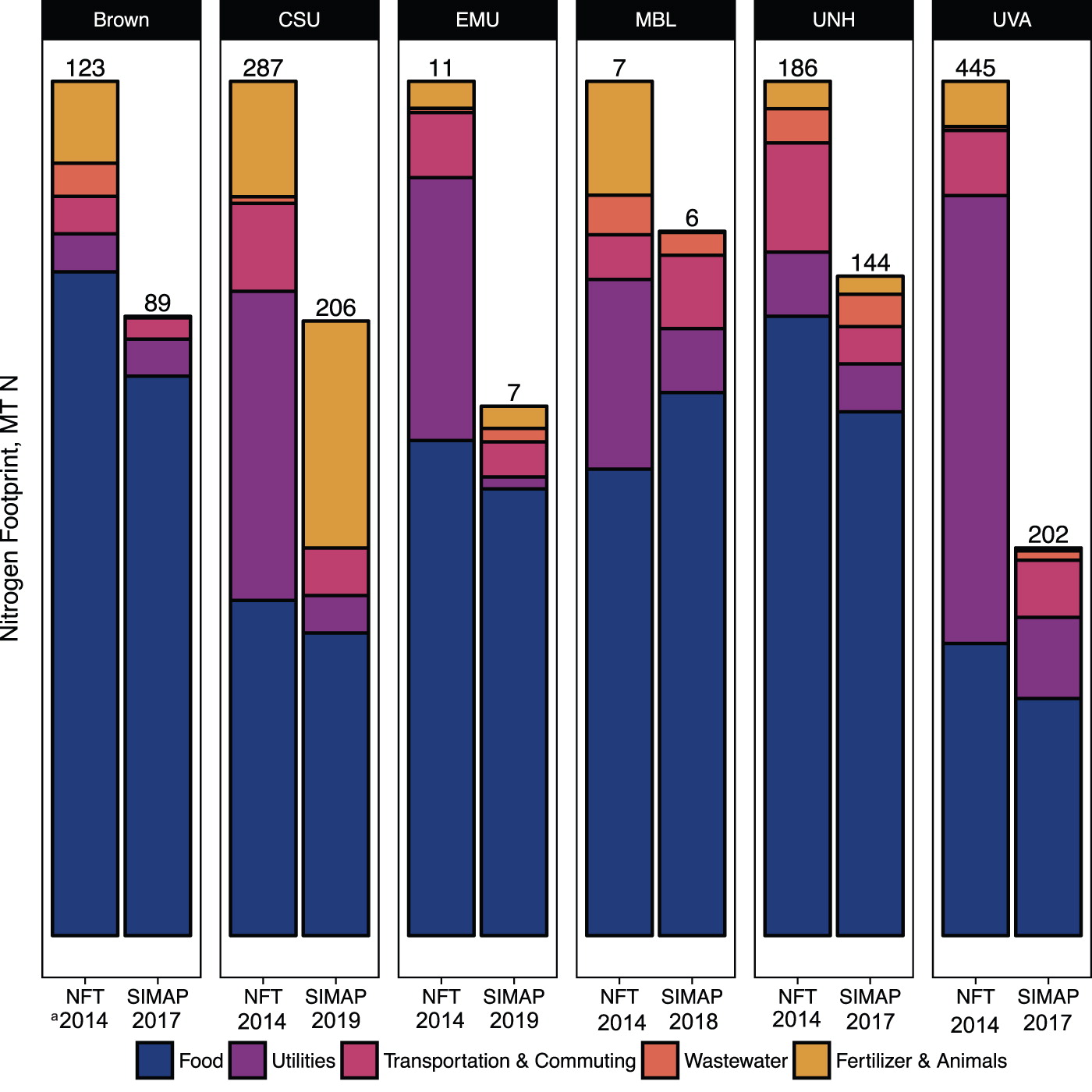 SIMAP now enables institutions to measure and track the release of reactive nitrogen to the environment by their direct and indirect activities, organized by the principles from the Greenhouse Gas Protocol. Tracking in turn allows institutions to address the issue of excess reactive nitrogen in the environment by identifying strategies that have the potential to reduce their impact.

Common nitrogen footprint reduction strategies include choosing more plant-based sources of protein in dining halls, switching to renewable sources of energy, improving energy efficiency on campus, and reducing waste. The University of Virginia's Nitrogen Action Plan is a roadmap for the university to achieve its nitrogen footprint reduction goal: